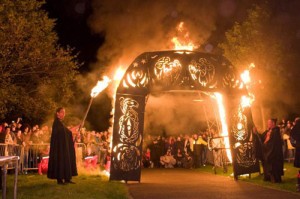 May Day is 1st May.  It is an ancient Pagan celebration of Spring across Celtic Europe. It is a time of festival.

May Day originated over 10,000 BCE as a pagan festive holy day celebrating the first spring planting. The ancient Celts and Saxons celebrated 1st May as Beltane, which means the day of fire. Bel was the Celtic god of the sun. The Saxons began their Mayday celebrations on the eve of May, 30th April.

The Celts honored the fertility of the gods with gifts and offerings, sometimes including animal or human sacrifice. Cattle were driven through the smoke of the balefires, and blessed with health and fertility for the coming year. In Ireland, the fires of Tara were the first ones lit every year at Beltane, and all other fires were lit with a flame from Tara.

It is customary to light the fire on May Eve (the last night of April) and allow it to burn until the sun went down on 1st May.   The fire was more than a big pile of logs and some flame. The bonfire was lit with a bundle made from nine different types of wood and wrapped with colorful ribbons. Once the fire was blazing, a piece of smoldering wood was taken to each home in the village, to ensure fertility throughout the summer months.

This fire festival is celebrated with bonfires, Maypoles, dancing, and lots of good old fashioned sexual energy.  It is a place where the entire community gathers around -a place of music and magic and dancing and lovemaking.

It was an evening of games and feasting celebrating the end of winter and the return of the sun and fertility of the soil. Torch bearing peasants and villagers would wind their way up paths to the top of hills or mountain crags and then ignite wooden wheels, which they would roll down into the fields below.

The May eve celebrations were eventually outlawed by the Catholic Church, but were still celebrated by peasants until the late 1700’s. While good church going folk would shy away from joining in the celebrations, those less afraid of papal authority would don animal masks and various costumes. The revellers, lead by the Goddess of the Hunt, Diana (sometimes played by a pagan-priest in women’s clothing), and the Horned God, Herne, would travel up the hill shouting, chanting, singing, and blowing hunting horns. This night became known in Europe as Walpurgisnacht, or night of the witches.

The Celtic tradition of Mayday in the British Isles continued to be celebrated throughout the middle ages by rural and village folk. Here the traditions were similar with a goddess and god of the hunt. As European peasants moved away from hunting gathering societies their gods and goddesses changed to reflect a more agrarian society. Thus Diana and Herne came to be seen by medieval villagers as fertility deities of the crops and fields. Diana became the Queen of the May and Herne became Robin Goodfellow (a predecessor of Robin Hood) or the Green Man. The Queen of the May reflected the life of the fields and Robin reflected the hunting traditions of the woods. The rites of mayday were part and parcel of pagan celebrations of the seasons. The Christian church later absorbed many of these pagan rites in order to win over converts from the ‘Old Religion’.

The two most popular feast days for medieval craft guilds were the Feast of St. John – the Summer Solstice – and Mayday. Mayday was a raucous and fun time, electing a queen of the May from the eligible young women of the village, to rule the crops until harvest. Besides the selection of the May Queen was the raising of the phallic Maypole, around which the young single men and women of the village would dance holding on to the ribbons until they became entwined, with their (hoped for) new love. There was also Robin Goodfellow – the Green Man – who was the Lord of Misrule for this day. Mayday was a celebration of the common people, and Robin would be the King, Priest or Fool for a day. Priests and Lords were the butt of many jokes; mummers would make jokes and poke fun at the local authorities.

The church and state did not take kindly to these celebrations, especially during times of popular rebellion. Mayday and the Maypole were outlawed in the 1600’s. Yet the tradition still carried on in many rural areas and the trade societies still celebrated Mayday until the 18th Century. As trade societies evolved from guilds, to friendly societies and eventually into unions, the craft traditions remained strong into the early 19th century.

In London the May Fayre was transferred from Haymarket in 1686 to Mayfair. The May Fayre lasted for up to 16 days and it soon became notorious for riotous and disorderly behaviour. In 1708 the May Fayre was abolished, only to be revived again with similar results. Building on the site was probably the most effective way of permanently suppressing the fair and by the mid-18th century almost the whole of modern Mayfair was covered with houses.

But just as the Church hijacked many Pagan traditions for its own, May Day was hijacked by the eight-hour movement by trade unions in Chicago in 1884 as a working class holiday. Subsequently, socialists, communists and anarchists further extended the hijacking of May Day when in Paris in 1889 the founding congress of the Second International declared May 1st an international working class holiday.   After the two world wars, the labour movement continued to pay lip service to Mayday and the occasion became a day for making grand speeches, but little else. In London a march continued to be organised, but this became more and more irrelevant except on the few occasions when it happened to coincide with a major dispute, the last being Wapping. The annual march became dominated by Stalinists, which led on one occasion to anarchists being attacked, and generally went round back streets.

May Day has since 1998 in London become further hijacked by low-life anarchists such as the groups Reclaim the Streets (RTS), West London Anarchists & Radicals (WAR) and J18’s ‘anti-capitalist movement’ and the Trotskyist front group Globalise Resistance.

May Day 2013 is the launch date of this website to reclaim the Angloceltic identity across the British Isles, recognising traditional festivals like May Day.