Undergoing renovation and surrounded by scaffolding, a fire started this afternoon in the attic.  Of course it was arson.

According to French newspaper Le Monde, the fire broke out in the attic of the monument before spreading across the roof.   A spokesperson for the cathedral said the blaze was first reported at 5.50pm (GMT) and the building was evacuated soon after.
Officials in Paris said the fire could be linked to restoration works as the peak of the church is currently undergoing a 6 million-euro ($6.8 million) renovation project.

A spokesman said the entire wooden frame of the cathedral would likely come down, and that the vault of the edifice could be threatened too.

“Everything is burning, nothing will remain from the frame,” Notre Dame spokesman Andre Finot told French media.

French historian Camille Pascal told BFM broadcast channel the fire was destroying “invaluable heritage.”  Built since 1163AD, the cathedral is home to incalculable works of art and is one of the world’s most famous tourist attractions.

“It’s been 800 years that the Cathedral watches over Paris”, Pascal said. “Happy and unfortunate events for centuries have been marked by the bells of Notre Dame.”  He recalled that Notre Dame bells sounded the death knell following the 2015 Paris attacks.

Notre-Dame is located on the Île de la Cité, one of two historic islands on the Seine River at the centre of Paris, first settled by the Parisi Celtic Iron Age tribes, the Île de la Cité is the oldest settlement in Paris.

Firefighters were trying to contain the fire when the cathedral’s spire collapsed. Authorities say the wooden interior now is burning.  Flames shot out of the roof behind the nave of the cathedral.  The spire has toppling and the fire is billowing thick plumes of smoke high into the blue sky as tourists and Parisians looked on aghast from the surrounding streets.

Paris is burning.  Hugo’s hunchback has been burnt alive.

But we won’t show the cathedral on fire.  Just this famous western facade. 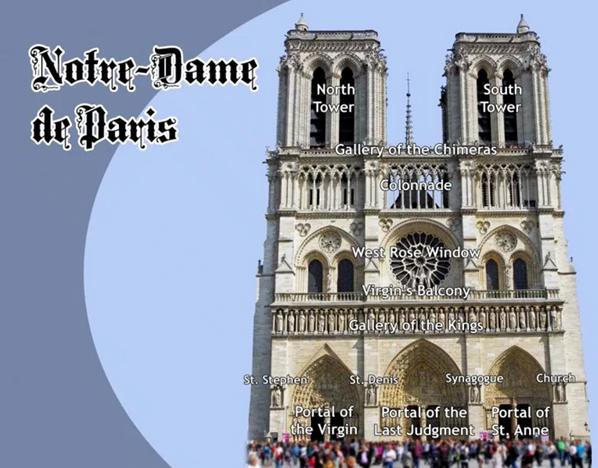 The cathedral is considered to be one of the finest examples of French Gothic architecture.

It surpasses both the Louvre and Eiffel Tower as Paris’s most visited monument with 12 million visitors a year.   It is a symbol of Paris and France.  That is why it was targeted by those who hatre the French – the invading Muslims.

Henry VIII dissolved the monasteries.  It’s time the mosques were dissolved across France and Europe.

It is still a challenge for many descendants of immigrants to consider themselves ‘French’, simply because they are not and never will be.

The marginalization of minorities in France is worse than elsewhere.

When French President Emmanuel Macron recently visited Calais, he defended his immigration policies. Talking about the 100,000 new asylum claims filed in France last year, he made a distinction in his speech between economic migrants and refugees fleeing persecution. His message was balanced yet firm. He asserted that economic migrants should be turned back, while genuine refugees allowed to stay.

Losing your ancient culture is wnat happens when you allow invasion of your country by incompatible and hateful foreigners.