Africans can’t govern, prefer to chimp out in parliament instead

September 26 and 27 2017:  Blacks in Uganda’s parliament went ape for a second day over a simple law to stop really old big men staying in power.

Like Chimpanzees, the top dog has to fight to stay on top.

Microphone stands being used as weapons, and at least two female lawmakers being carried out after collapsing.   Negros exchanged blows and kicks after security personnel were called in to remove lawmakers who had been ordered out of the chambers.

Under the existing constitution, eligibility to stand as a presidential candidate has an age ceiling of 75 years. That makes President Yoweri Museveni, 73, in power for more than three decades, unqualified to seek re-election at the next polls in 2021. Removing the age cap would clear that hurdle.

The proposal to change the constitution – echoing steps by veteran leaders elsewhere in Africa to void legal limits on their rule – has stirred widespread opposition from rights activists, the political opposition, religious leaders and from some members of Museveni’s own ruling party. 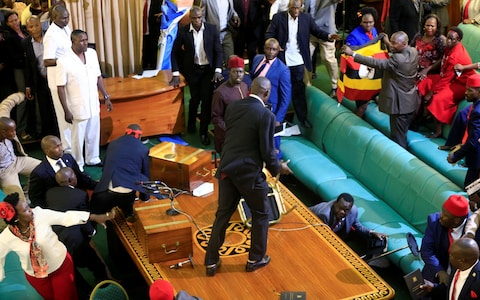