Between 1784 when forfeited estates were first administered by government and 1854 when three generations hence the last evictions occurred from the property of Robertson on Strathcarron, a whole race of Scots was dispossessed and dispersed from their ancient ancentral homeland. 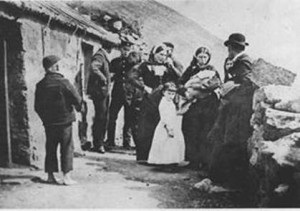 The uprooting of the Highland people, and the final destruction of their society in favour of wool and mutton, was actively supported by the Law and by the Established Church.  In some counties, Sutherland particularly, it was called “Improvement“.  Roads were built through emptied glens, bridges crossed deserted rivers.  When the “idle and indolent peasantry” protested, their ministers told them that the laird’s wish was God’s will, and that famine and pestilence, which came all too frequently in the wake of eviction, were a Divine punishment on a “sinful and lazy” people.

The Highlanders were defenceless aganst the new sheep economy.  Arguably, they were the victims of their own traditions, and of the melancholy that had lain on their spirits since the military defeat of the clans at Culloden.

They were betrayed by their chiefs, whose children they believed themselves to be the lairds of Clanranald, Atholl, Breadalbane, Lochiel, Ross, Sutherland, Argyll and the Isles became the chiefs of roast lamb and worsted cloth.

Their people went to the slums of Glasgow, or died from fever and smallpox on their way in forced emigration to Upper Canada and to the stock farms of Australia. 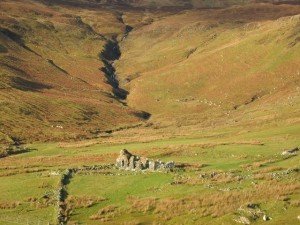 Wee Tusdale lies two miles from the closest road or current population, has the remains of dozens of buildings abandoned since the clearances.

This is the biggest ruin in the valley. It was the house of the tenant sheep farmer (‘crofter‘) for whom the rest of the people were cleared. This was once a well-populated place. South-facing, well-sheltered and with a wide expanse of green and fertile ground, it is easy to see why. Today only a few sheep roam among the ruins. 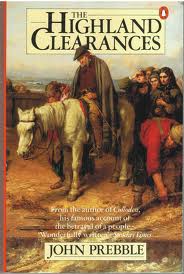 2013 marked 200 years since the ‘Kildonan Riots’ when an uprising by farming tenants showed the majority of the population of the Strath of Kildonan were unwilling participants in the changes forced upon them during the Highland Clearances. Today, as if to prove that little has changed in the world, a major seminar highlighting the parallels between the Highland Clearances and land grabs in developing countries will be held early next month in Sutherland.

Land grabs are a major cause of hunger. In developing countries, land 26 times the size of Scotland was sold off globally between 2001 and 2010. The land could have grown food for one billion people but instead much of it is used to grow crops for export, or for

biofuels which end up in the petrol tanks of cars. Those who rely on the land to grow food and feed their families are often evicted without consultation or compensation – sometimes forcibly.

Organised by the IF campaign, the seminar ‘History Repeating? Land Grabs and the Highland Clearances’ will examine the parallels to events in Scotland during the Highland Clearances. The event – which is free, but requires pre-registration – is being held on Monday, March 4, at the Timespan centre in Helmsdale, Sutherland. The seminar will discuss how Scottish history can help to influence the global debate on land rights in order to protect the world’s poorest people. Enough Food For Everyone IF is a coalition of more than 100 organisations across the UK which is calling for action to end the scandal of hunger.

Judith Robertson, a spokesperson for the IF campaign in Scotland, argued that there were “clear parallels between the turbulent events of Scotland’s past and the reality right now for many people in developing countries.

“We can’t let the lessons from the Highland Clearances be forgotten. The clearances are a notorious episode but, right now, an area of land bigger than Loch Ness is snapped up by foreign investors in developing countries every five hours. As we help to mark the 200th anniversary of the clearances in Sutherland, we hope Scotland’s story can help influence the global debate on land rights.”

The IF Campaign wants stricter global rules to protect small-scale farmers in developing countries. It is asking the Scottish Government to host a Global Land Hearing in 2013 to explore how existing rules can be strengthened. 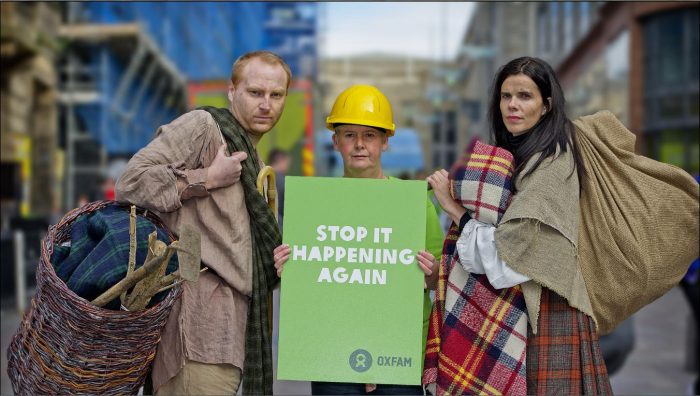 1784-Forfeited Estates, administered by the government, are restored to their owners.

1786-Large emigrations to Canada from Knoydart, on Glengarry’s estate.

1790-Cheviot sheep introduced in the Highlands.

1807-Ninety families removed from parishes of Farr and Lairg.

1821-Riots and evictions at Gruids.

The Highland Clearances, The Second Phase

1842-First attempts to deliver writs of removal to the people of Glencalvie.

1846-Widespread famine in the Highlands (as in Ireland). Establishment of Destitution Relief Boards in Glasgow and Edinburgh.

1853-Last of the people in Boreraig and Suishnish on Skye cleared.

1854-Last evictions from the property of Robertson on Strathcarron.

The Act itself did not quell the agitation. In particular it was very weak in terms of enabling the newly formed Crofters Commission to resolve disputes about access to land. It was enough however to make much more acceptable, politically, the use of troops in confrontations with agitators. 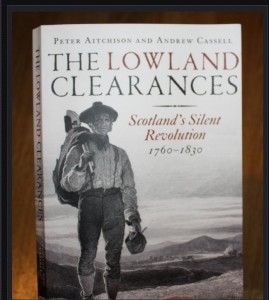