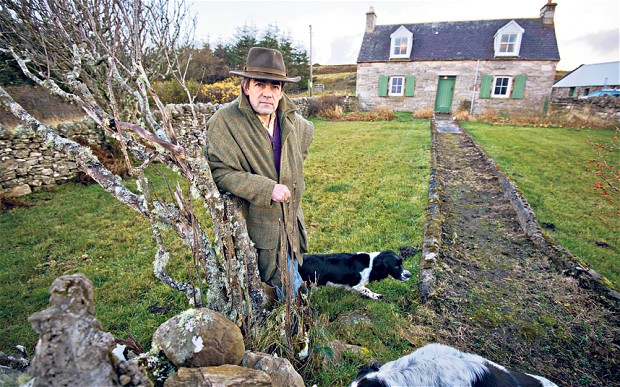 Local ancestral Scot Jeremy Gow, is among the first of more than 1,600 Scots who either rent or own a second home in the Scottish Highlands.

But for political bureaucratic greed, Gow and many ancestral Scots could lose their land around their properties in what has been dubbed the ‘Second Highland Clearances‘.

Every summer during his childhood, Jeremy Gow and his parents would load up their Austin Maxi for a gruelling eight-hour drive. Their destination was his grandmother’s holiday home in Melness, a small Scottish village on the north coast. There he would spend an idyllic month building sandcastles, fishing for mackerel and being beaten at racing demon by Granny.

He was so entranced that after each trip he would write a thank-you letter to “Croft Granny”, so named because, since 1954, she had been tenant of one of about five dozen crofts, or Highland smallholdings, on the Melness estate.

When Jeremy reached 18, his grandmother bequeathed him the tenancy of the four-acre plot. Now 47 and a furniture restorer, he has carefully maintained the building, updating the detailed record of improvements that she had kept under the heading “Progress Report”. Over 30 years, he has planted trees and regularly visits with his family. It was where his two daughters took their first steps and he hoped they would one day inherit it.

But next week, regulators will terminate Gow’s tenancy. He is among the first of more than 1,600 people who either rent or own a second home in northern Scotland who could lose the land surrounding their properties in what has been dubbed “the second Highland clearances”.

The situation does not bear comparison with the brutality of 200 years ago, when landowners set fire to homes in order to clear their estates for more profitable sheep farming. But feelings among the group, some of whom can trace their families back to the Clearances, range from devastation to anger. They are being penalised because they live more than 21 miles away from their croft properties, and are deemed not to contribute enough to community life.