Many celebrities out of Hollywood are liberal leaning leftists and so they politically support the leftist Democrats for personal and ideological reasons.  Their very vocal support for ideal notions like globalism, no borders, climate alarmism, global welfarism is quite fundamentalist and inflexible.  They evangelise Al Gore, Obama and the Clintons as if they can do no wrong.

These individuals make so much money from performing on stage or set and they become famous international brands, build huge egos and then realise that they can wield considerable public influence.

Celebrities become so wealthy and influential as to join a privileged elite class – ‘neo-aristocrats’ really.  They then think they have some privileged right to use that influence as power to shape public opinion and to steer voters toward their own personal views and voting preferences.

They don’t. It is an abuse of personal power, only derived from celebrity status, not merit.

Who frankly cares how Leonardo DiCaprio or Snoop Dog vote?

In contrast, Hollywood actor Ronald Reagan who appeared in more than 50 films, at least gained experience as president of the Screen Actor’s Guild and by serving two terms as Governor of California.  Reagan’s interest in politics was met with merit in concerted hard political campaigning to become American president.

But smart arse quips by opinionated celebrities spewing schoolyard vitriol against presidential candidates is reprehensible and low-life.  It only cast aspersions upon the Hollywood brand.

Despite having made their riches through Western capitalism, they take wealth so much for granted that they want for nothing material.

Instead, these celebrities indulge their time in idealist ideology like multiculturalism, disarmament, welfarism, libertarianism, globalism, and communism and social deviances – like homosexuality, anti-vaccination, and legalising narcotics.  They align themselves with the intellectual class (although many are found wanting in that regard).

Hollywood’s long-running romance with the liberal left sees Democratic candidates make a beeline to Hollywood for campaign contributions every election season.  When President Barack Obama flies to a star-studded Hollywood party to raise $1 million for the Democratic Congressional Campaign Committee they given him a rock star welcome.

During Obama’s presidential campaign, George Clooney expressed an urge to follow then candidate Obama around the room. Halle Berry, likewise, cooed: “I’ll do whatever he says to do.” Obama of course has a special hold on Hollywood, but he is by no means alone. Al Gore the “Goracle” receives a five-minute standing ovation every time he strolls onto Hollywood’s red carpet.

Many people have offered theories to explain Hollywood’s love affair with the Democratic Party, the most notable being Nobel Prize-winning economist Gary Becker of the University of Chicago. He argued that Hollywood tends to have non-traditional views on social mores — high divorce rates, children out of wedlock, high presence of gays, frequent abortions, frequent drug use, premarital sex, etc.  Many have less than savoury characters else are prejudiced immigrants incompatible with traditional American values.

So then they believe the rhetoric, propaganda and outright lies the Democrat media machine concocts about president-elect Donald Trump.  No need to fact check about defamatory sexism lies – at Hollywood, Democrat groupthink is unquestioned.

The Hollywood vocal hate campaigners are lead by the likes of Meryl Streep and Helen Mirren who ridicule him saying he had an “enormous body, small head” and “dinosaur-y hands” – not an intelligent critique.

Comedian John Oliver of Trump  says “It calls to mind both Frankenstein’s monster and a rabid dog.”  George Clooney labels Trump “a xenophobic fascist” for wanting to close Obama’s open borders and to protect America’s sovereignty and jobs.

Comedian Chelsea Handler posted a topless picture of herself with the words ‘Donald Trump Is A Butthole’ on her back.  Hollywood actress Eva Longoria hates Trump because she’s got Mexican blood and sides with those south of the border that Trump is set to close.

Watch Hollywood Clintonista thug Robert de Niro incite violence against America’s president-elect.  His ego is up his backside.  He thinks he’s still on set playing some gangster unable to distinguish fantasy from reality.  Considering his life choices he’s not too bright without a script, director and multiple takes.  In private life he’s an oil driller and anti-vaccination cultist.

What goes around comes around you schmuck!

Some sixteen hate-filled Hollywood elitists and media to try to steer American voters, proclaimed before the presidential election result that if Trump won they would leave America.  Most of them are comedians and so think they’re funny.

Clearly they each have vested interests by supporting the Democrats. Are these individuals so naïve not to grasp the fact that their celebrity influence is being exploited by the Democrat National Committee propaganda machine to garner votes and fund-raise? 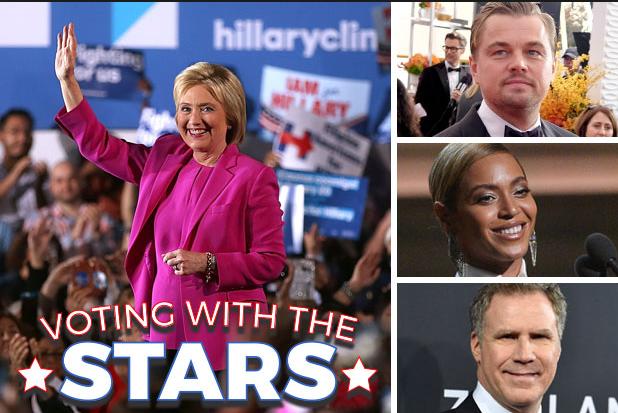 ..did a lot for negro status in America.

Well, they need to pack their bags and head to Africa, communist Canada or Venezuela where leftism reigns. Those who laugh first cry last. 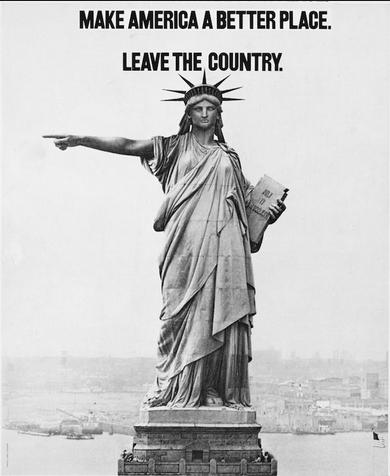