Imperialist Islam and its hateful terrorism and attacks on Western Civilization has had it coming.

Yesterday, American President Donald Trump, leader of the free world, finally has acknowledged the obvious: that Jerusalem is Israel’s capital.   President Trump has ordered the State Department to move the U.S. Embassy from Tel Aviv to Jerusalem.

During the First Crusade in 1099, Christian knights from Europe captured Jerusalem from Islamic  barbarism.  Now 918 years later, the Thirteenth Crusade is finally converting the capture to an eternal bastion of Western Civilisation in partnership with the Jews. 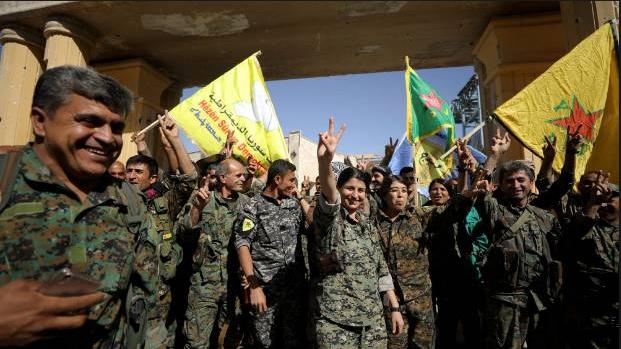 President Trump on Wednesday formally recognized Jerusalem as the capital of Israel, reversing nearly seven decades of American foreign policy and setting in motion a plan to move the United States Embassy from Tel Aviv to the fiercely contested Holy City.

“Today we finally acknowledge the obvious: that Jerusalem is Israel’s capital,” Mr. Trump said from the Diplomatic Reception Room of the White House. “This is nothing more or less than a recognition of reality. It is also the right thing to do. It’s something that has to be done.” 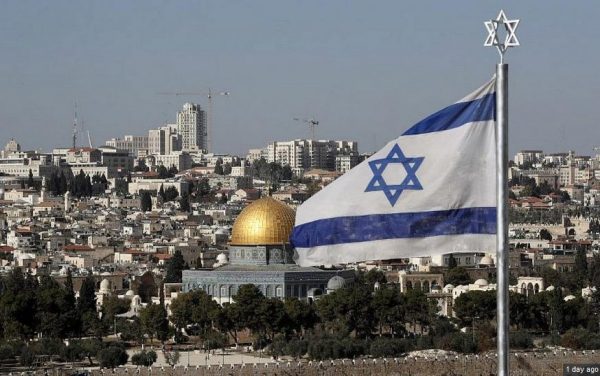 The president cast his decision as a break with decades of failed policy on Jerusalem, which the United States, along with virtually every other nation in the world, has declined to recognize as the capital since Israel’s founding in 1948. That policy, he said, brought us “no closer to a lasting peace agreement between Israel and the Palestinians.”

“It would be folly to assume that repeating the exact same formula would now produce a different or better result,” Mr. Trump declared.

Recognizing Jerusalem, he added, was “a long overdue step to advance the peace process.”

President Trump said he would begin preparations to move the U.S. Embassy in Israel from Tel Aviv to Jerusalem.

Though he did not mention it, Mr. Trump signed the same national security waiver signed by his predecessors, from Barack Obama to George W. Bush to Bill Clinton, which will allow the administration to keep the embassy in Tel Aviv for an additional six months. White House officials said that was unavoidable because it would take several years to move the embassy staff to a new facility in Jerusalem. 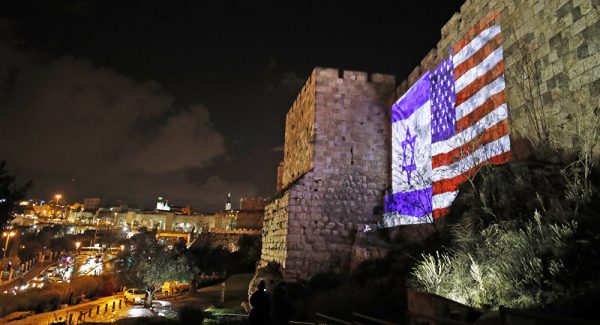 “There will of course, be disagreement and dissent regarding this announcement,” the president said. He appealed for “calm, for moderation, and for the voices of tolerance to prevail over the purveyors of hate.”

The Chinese have warned of expected blowback from the Arabs, but the Chinese are equally Third World, barbaric and imperialist, so who listens to them?

President Trump’s promise to move the embassy appeals to evangelical voters and pro-Israel American Jews, including Sheldon Adelson, the Las Vegas casino magnate. By delivering on that promise, President Trump’s aides said, he was enhancing his credibility as a peacemaker. 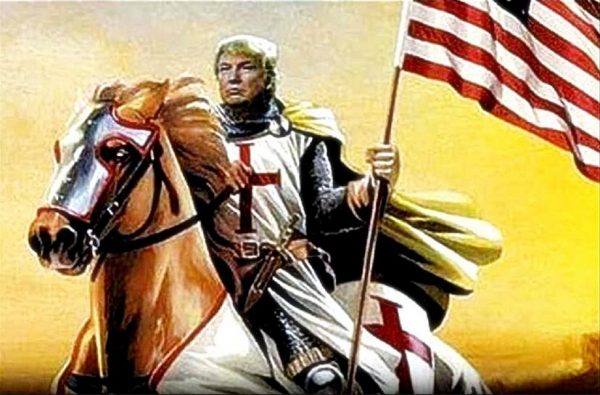 The announcement, officials said, was recognition of current and historic reality. West Jerusalem is the seat of Israel’s government, and recognizing it as such would remove ambiguity from the American position, they said.

During the First Crusade in 1099 AD, Christian knights from Europe capture Jerusalem after seven weeks of siege and begin massacring the city’s Muslim and Jewish population.

Beginning in the 11th century, Christians in Jerusalem were increasingly persecuted by the city’s Islamic rulers, especially when control of the holy city passed from the relatively tolerant Egyptians to the Seljuk Turks in 1071. Late in the century, Byzantine Emperor Alexius Comenus, also threatened by the Seljuk Turks, appealed to the West for aid. In 1095, Pope Urban II publicly called for a crusade to aid Eastern Christians and recover the holy lands. The response by Western Europeans was immediate.

The first crusaders were actually undisciplined hordes of French and German peasants who met with little success. One group, known as the “People’s Crusade,” reached as far as Constantinople before being annihilated by the Turks. In 1096, the main crusading force, featuring some 4,000 mounted knights and 25,000 infantry, began to move east. Led by Raymond of Toulouse, Godfrey of Bouillon, Robert of Flanders, and Bohemond of Otranto, the army of Christian knights crossed into Asia Minor in 1097. 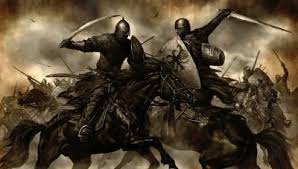 In June, the crusaders captured the Turkish-held city of Nicaea and then defeated a massive army of Seljuk Turks at Dorylaeum. From there, they marched on to Antioch, located on the Orontes River below Mount Silpius, and began a difficult six-month siege during which they repulsed several attacks by Turkish relief armies.

After resting and reorganizing for six months, the crusaders set off for their ultimate goal, Jerusalem. Their numbers were now reduced to some 1,200 cavalry and 12,000 foot soldiers.

On June 7, 1099, the Christian army reached the holy city, and finding it heavily fortified, began building three enormous siege towers. By the night of July 13, the towers were complete, and the Christians began fighting their way across Jerusalem’s walls. On July 14, Godfrey’s men were the first to penetrate the defenses, and the Gate of Saint Stephen was opened. The rest of the knights and soldiers then poured in, the city was captured, and tens of thousands of its occupants were slaughtered. 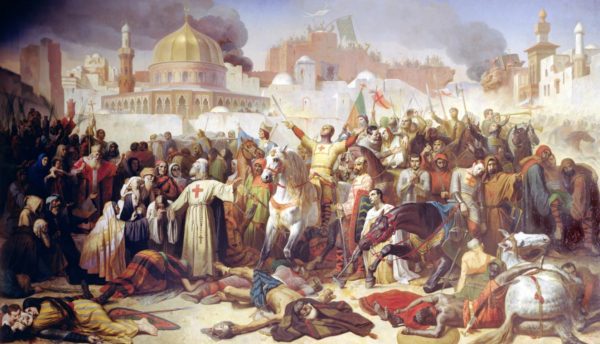 The crusaders had achieved their aims, and Jerusalem was in Christian hands, but an Egyptian army marched on the holy city a few weeks later to challenge their claim. The Egyptians’ defeat by the outnumbered Christians in August ended Muslim resistance to the Europeans for the time being, and five small Christian states were set up in the region under the rule of the leaders of the crusade. 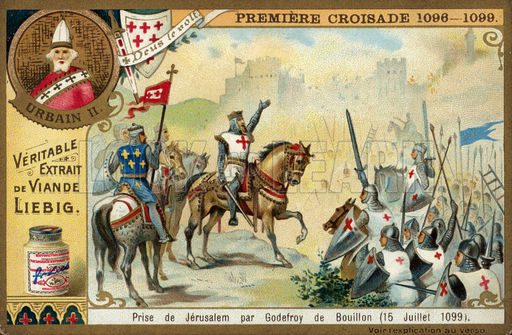 So the muslim millenia of imperialism is finally being halted.   No more caliphates, caliphs, Abbasids, Arab dynasties, saltanates, sultans, amirs, emirs, or islamic empires.  Muhammad has been expelled.

Jerusalem’s Old City and the Temple Mount is the holiest site in Judaism and is also sacred ground to Christians.

So now the Arabs are being outed for good, and Good. 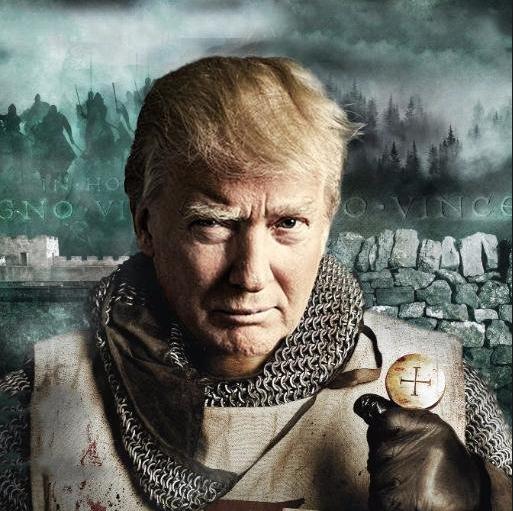 Israel was created in 1948 so that the wandering Jew could have a home.  Now that it has a capital in Jerusalem, there is even less excuse for the world’s Jews to remain outside Israel.    Jews and zionists should now take up the invitation of Israeli prime minister, Binyamin Netanyahu in 2015 to migrate en masse to Israel:

“We say to the Jews, to our brothers and sisters, Israel is your home and that of every Jew. Israel is waiting for you with open arms.”

That’s all 7 million in America meddling in American affairs and the other 8 million around the world outside Israel.