French nationalist Marine Le Pen (48) of the ‘Front National’ party (FN) launched her presidential campaign yesterday in Lyons amid a sea of tricolour flags in a capacity filled conference hall to a cheering crowd of 3,500 French patriots, with a further 1,500 gathered outside. 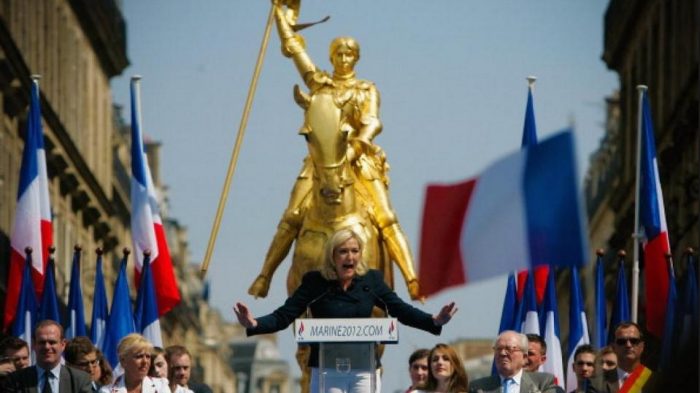 Like a Joan of Arc reincarnate, Marine Le Pen declared that the popular anger that led to the vote by Britain to leave the EU and Donald Trump’s election will sweep her to the French presidency on 7th May 2017.

The corporate media mistakenly brands her and her party ‘Right Wing’.  Wrong!  ‘Right Wing’ is the conservative established order – think former president Nicolas Sarkozy and his Union for a Popular Movement party.  The mainstream media are either ignorant or misleading or both.

Whereas Marine Le Pen is nationalist, and portrays herself as the latest beneficiary of a worldwide uprising AGAINST the established order.

“People are waking up against the oligarchy. The impossible is becoming possible. Presidents like Donald Trump are not only being elected but they are respecting their promises,” she said. “Britain has set a path to freedom with Brexit. The wind of history has turned and it will carry us to the summit.”

The party has 2,000 local councillors, runs more than 15 local authorities and is almost certain to add to its two MPs in parliamentary elections this year.

Ms Le Pen’s hopes have been bolstered by the crises besetting mainstream French parties. Francois Fillon, candidate for the centre-right Republicans, is embroiled in a damaging scandal over claims that he used euros 1 million of taxpayers’ money to employ his wife and children in fictitious jobs. Benoit Hamon, representing the deeply unpopular ruling Socialist party, is running on a radical far-left borderless pro-islamic manifesto, like Germany’s xenomaniac, Angela Merkel.

French Nationalism is at the heart of Le Pen’s presidential campaign. Think back to President Charles de Gaulle (1890-1970) and the Fifth Republic.  France should be its own master and have no globalization issues, no more European Union membership or open borders.

The EU is a failure,” insists Le Pen.   France’s economy is in a malaise, stagnating for the past three years while unemployment has risen above 10 per cent under the incumbent communist coward Hollande, a yes boy for the globalist EU.

“We need to get out of the system. We’re in a system that is a little rotten. We need a fresh pair of eyes.” 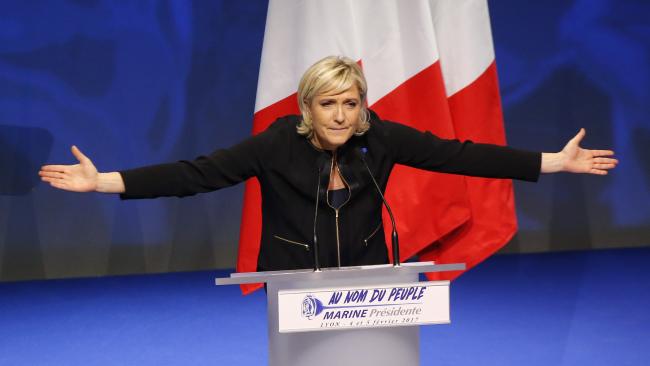 Le Pen wants to bring an end to forced mass immigration and in the wake of a series of deadly islamic terrorist attacks in Paris and Nice.  She recognises that the French republic is under Islamist assault.

“The choice that voters have is a choice of civilisation. Are our children going to live in a free and democratic country that respects our values? Will they even have the right to speak our language?”

The slogan “French First” — coined by the elder Le Pen in 1985 — remains alive under Marine Le Pen.  “My program cannot be put into place if we remain subjugated by European diktats,” she says. “I see the grand return of nationalism.” 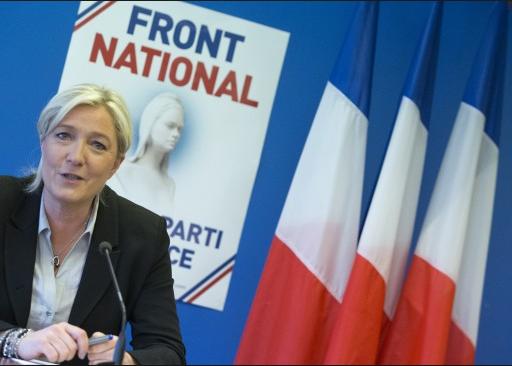 Le Pen offers renewal to France and a “commitment to return [sovereignty] to the people.”
This should be an easy decision for our French friends to make, one that becomes simpler and more defined with every passing day of the Islamic invasion.

Freedom is popular, and once it’s lost, it’s difficult to regain. Just like in America, the French patriots understand that reality and the true nature of the decision that lies ahead and the globalist threat we must all overcome.