The American Civil War was not just about slavery, but a White cultural and territorial conflict over the original American Congress of the Confederation from 1781 versus an emerging and powerful federal authority. The war was fought over state’s rights and the limits of federal power in a union of states.

The South remained a predominantly agrarian economy while the North became more and more industrialized. Different social cultures and political beliefs developed. All of this led to disagreements on issues such as taxes, tariffs and internal improvements as well as states rights versus federal rights.

The burning issue that led to the disruption of the union was the debate over the future of slavery. That dispute led to secession, and secession brought about a war in which the Northern and Western states and territories fought to preserve the Union, and the South fought to establish Southern independence as a new confederation of states under its own constitution. 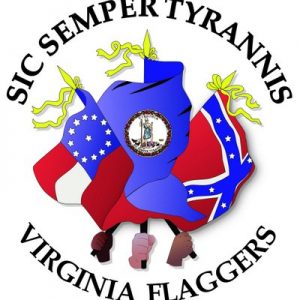 The Virginia Flaggers were organized on September 5, 2011. What began with just a few dedicated Southerners, has now grown to include hundreds of people, from all over the country, who have joined us in defending the honor of the Confederate Veteran, protesting Heritage violations, and forwarding the colors in Richmond, and Virginia… and beyond!

When needed, flaggers stand with our flags against those in opposition in a peaceful, yet forceful manner, to educate and inform the general public, and in open and visible protest against those who have attacked us, our flags, our ancestors, or our Heritage.

Our weapon is the Confederate Battle Flag. Our enemies are those who worship ignorance, historical revisionism and Political Correctness.

We take pride in taking a stand for the Cause. For this Cause, we call others to flock to the banner of our ancestors, take up their flags, and join us in battle, for OUR TIME IS NOW.

The Va Flaggers reject any person or group whose actions tarnish or bring dishonor upon the Confederate soldier or his reason for fighting, including those groups and persons using our cherished flag as a symbol for their own dishonorable purposes.”